What would you do if you weren’t afraid? 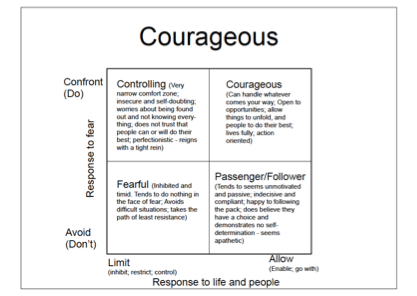 This is a question posed to Face Book staff every day according to their Chief Operating Officer, Sheryl Sandberg (Lean In).  And it is a question I believe we should ask ourselves everyday as leaders.  Because it is my fervent belief that nothing gets in our way more than fear.

As leaders, whether we lead a team or an organisation or whether we are thought leaders, we need courage.  Courage is not the absence of fear  quite the opposite.  It is “feeling the fear and doing it any way”.  Susan Jeffers wrote a book of the same name in which she categories our fears into those things that are external to us (such us fear of illness and death), and those things that are internal to us and are mainly driven by our ego (such as fear of appearing silly or ‘up ourselves’; fear of others not liking us).  Jeffers distills the whole thing down to fear of not being able to handle it.

Now I am as fearful as the next person; in fact, according to Dr Brizendine, as a woman, I might be more fearful than most men, simply because of the way I am wired.  She is a prominent neuropsychiatrist from California and wrote the book on “How women think”.  In it she identifies the differences between how men and women’s brains are structured and how they work.  In essence, women are wired to protect relationships or worry a lot about them failing – our job is to maintain the social structures.  Men are less concerned about this, and when you think about it way back in the neandathor times (and we have actually changed very little since that time), men were designed (like the males of most species) to procreate and protect.  Did you know that the the brain space devoted to sex drive, aggression and action is 2 and half times larger in men than in women.    If they had a prefrontal cortex the size of women’s, then they would be too worried to do either of these things – and there’d be a whole lot less road rage – because this is the centre that controls anger, fear and aggression – the fight and flight centre.  It makes women worry about the consequences of these emotions – it carries its own fear.

“…the female brain has a tremendous aversion to conflict, which is set up by fear of angering the other person and losing the relationship.  This may be accompanied by a sudden change in some brain neurochemicals, such as seritonin, dopamine, and norepinephrine – causing an unbearable activation in the brain on almost the same spectrum as a seizure- when anger or feelings of conflict arise in a relationship.” (Brisindine)

Brizendine counsels to be aware of these physiological differences and then “choose not to act or to act differently than you might feel compelled”.  So we are not slaves to our bodies after all. And of course I know this because despite wanting to commit murder just once every month, I haven’t so far.  (Although there is case law that suggests I could use PMS as a defence if I ever did ‘snap’.  For example. in 1981 a barmaid was found guilty of ‘manslaughter – not murder on the basis that “PMS ‘turned her into a raging animal each month and forced her to act out of character’ (Benedek 1985 p. 24).”  But I am getting side tracked.)

Given that the proportion of women in nursing remains at around 95%, I would expect our culture to be somewhat ‘avoidant’.  And this is borne out by the cultural assessments performed in hospitals and nursing homes using the Organisational Culture Inventory in Australia and New Zealand.  Let me explain my thinking a bit more.  The figure below shows how I conceptualise being courageous.  Being courageous is actually the ability to confront your fears – rather than avoid them, but to allow situations to unfold rather than limit or constrain them in some way.  Both of these actions takes courage. 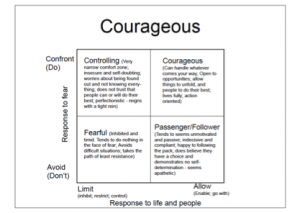 After a bad fall from my horse, I lost my confidence and felt an extra-ordinary level of fear whenever I even thought about riding him again.  When I did ride – confronting my fear, I held a really tight rein, restricting his movements so that I could control the situation as much as possible.  But my nervousness and tight reins made him feel nervous too; the horse worried about what I was worried about – I was the ‘leader’ after all; and he worried about what I would do if he put a step wrong.  It was a vicious circle.    I had become very controlling.  Actually, I am being overly generous, I had probably always been a little controlling.  However, this experience helped me realise the impact of that mindset on those around me.

This scenario describes many managers who are controlling.  The thing is they are confronting their fears of leading which is often related to their fear of not knowing enough and being found out (impostor syndrome).  They make sure that the situation is tightly controlled in order to manage the level of their uncertainty.   The reality is, many of the things we fear are really external to ourselves and cannot actually be controlled.  So our fear, while well placed, cannot be overcome by trying to constrain things we have no control over.

Our best bet is to accept for the most part much of what we worry about; that what we are fearful of is not so much the thing or situation, it is as Jeffers puts it, that we won’t handle it.  As I rode my horse in the first 1-2 years after my fall, I was most fearful of coming off again. I worried that if he shied or bucked, I couldn’t stay on and I’d fall again.   But with many riding lessons and loads of riding I overcame the need to control the horse because I realised with experience that even when my horse shied, I didn’t fall off.

I became an even better rider than before, and most likely a better leader and person.  I consciously try not to control my situation and other people – allowing them to unfold and reveal their brilliance and the opportunities that emerge – the opportunities that I could not hope to manufacture even if I tried to.  I often say to myself now, things are happening as they should  – which is a far cry from where I was having to control everything in case things happened as they should not!!

So here are some ideas on becoming an even more courageous leader:

1. Allow things to unfold  and people to take initiative – they will always surprise you if you show them how much you trust them (and yourself) –  that you and they can handle what ever happens (so far you have – haven’t you?).

2. Feel the fear – do you own little risk assessment.  Notice it, name it, critically appraise if it is real, likely or whether the consequences are catastrophic.  Or whether the fear has more to do with how you think others might think of you.  In the end, you rarely know how people actually think of you, and in a way you can’t control this either.  Be your best self – that is all you need to be in this life.

3. Do it anyway – life threatening potentials aside – do what you need to do in order to reach your goals and lead a fulfilling and purposeful life.  Just do it and do it lots! Over time, you will actually stop feeling fearful and feel exhilarated.  Ever time you overcome a fear, your self-esteem grows.  Every time your self esteem grows, you are able to open your self up to more possibilities – allowing them to emerge – you become more courageous – it is a virtuous cycle.

What fears are currently getting in the way of you being a great leader?